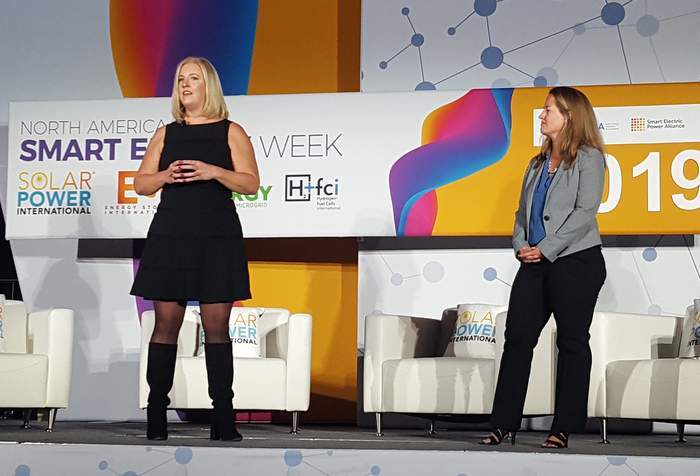 Solar Power International started like all solar conferences do with the obligatory look back at how far things have come, which always feels both meteoric (on pace for 95 GW installed!) and disappointing (less than 2 percent of total generation). But if the latest bold proclamation from the Solar Energy Industries Association (SEIA) is on the money, the disappointments will soon too be a thing of the past.

Yes, from the stage at the opening session of SPI 2019 in Salt Lake City, Abigail Ross Hopper, CEO of SEIA, told attendees and the world at-large that the organization is rolling out a 10-year strategic roadmap for solar to hit 20 percent of U.S. electricity generation by 2030.

“The Solar+ Decade represents opportunity and a paradigm shift as we transform energy use in America,” said Abigail Ross Hopper, president and CEO of SEIA. “When we hit this goal, by 2030 we will more than double our workforce and add $345 billion in private investment, all while offsetting electricity sector emissions by 35%. But we can’t get there on momentum alone. We’ll need policies, aggressive collaboration, and action from every member of the industry to make these goals a reality,” she continued.

Earlier this year, SEIA laid claim to the 2020s, as the Solar+ Decade to signify the leading role solar and its partners will play in reimagining our energy landscape. The roadmap spells out the benefits of reaching 20% solar by 2030, as well as the collaborations, policy mechanisms, and growth management the industry will need for radical market transformation.

To achieve this goal, according to Hopper, the solar industry will need to consider the following:

Collaborations: A cohesive solar industry and external partnerships will be key to the industry’s success. Partnerships with storage, wind, and other technologies will be critical to advance grid infrastructure and change how we generate, distribute and consume energy.

Market Accelerators: Economic and political forces outside of the solar industry, like energy storage, carbon reduction goals, and the further electrification of our economy have their own momentum and solar will need to continue to ride this wave of success. Much of the opening session was used as a rallying cry for the industry to continue speaking with a unified voice and telling this story to state representatives and their community.

Market Levers and Policy Drivers: Reaching 20% solar by 2030 will depend on a variety of factors, including the industry’s ability to find new opportunities for cost reductions and to move or change policies that can drive growth. The industry will need to streamline permitting challenges to reduce costs, continue its push on net energy metering and other state-level policy in emerging markets, and pass an extension of the ITC to continue growth.

Growth Management: The industry must consciously build a strong foundation to support itself. We must proactively address cybersecurity, recycling and land use challenges, as well as grid modernization and the inclusive, equitable distribution of opportunities in solar.

“As the solar industry prospers, we must be thoughtful about who’s benefiting from solar and the enormous economic and climate benefits it will bring,” Hopper said. “Together we can show that the Solar+ Decade is a story of inclusive growth that will both lift our communities and tackle our pressing climate challenges.”

The entire 10-year vision would take a “bigly” hit right off the bat depending on the results of the 2020 election and the success of the current full court press to extend the Investment Tax Credit (ITC).

How bigly? According to a forecast released at during the opening session of Solar Power International, Wood MacKenzie believes an extension of the ITC would spark $87 billion in new private sector investment and add 113,000 American jobs over baseline estimates by 2030, according to 10-year forecasts released today by the Solar Energy Industries Association (SEIA) and Wood Mackenzie Power & Renewables.

“The utility-scale segment will see the greatest benefit of the tax credit extension, with 63 of the 82 additional GW coming from that segment, as solar will gain ground against other generation resources based on price competitiveness,” said Colin Smith, senior analyst with Wood Mackenzie. Austin Perea, Wood Mackenzie senior analyst added, “the distributed solar segment will benefit as well, as a tax credit extension accelerates the timeline for which emerging state markets achieve grid parity relative to our base case outlook.”

Since its implementation in 2006, the ITC has helped create more than 200,000 American jobs, added $140 billion in private sector investment and grown solar deployment by 10,000%.

The solar ITC is currently scheduled to begin stepping down at the end of this year, with the commercial system credit dropping to a permanent 10% in 2022, and the residential system credit phasing out entirely.