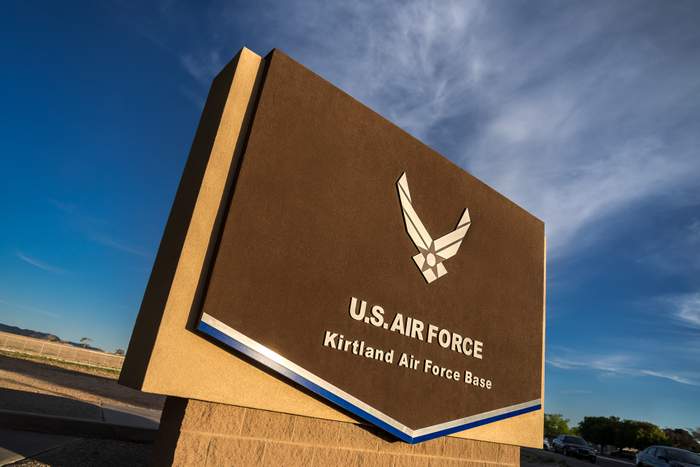 Kirtland Air Force Base (KAFB) in Albuquerque, New Mexico, is one of the largest bases in the country and the most mission critical for the study of energy and renewables. Some of the most important military personnel are housed there in times of crisis, so energy security and resilience are of the utmost importance. The base is also home to Sandia National Laboratories and interconnects the Photovoltaic Systems Evaluation Lab, (PSEL) the Department of Energy’s Testing Facility for the country.

It’s a significant place to prove out a revolutionary new microgrid platform, especially if Sandia is rigorously testing it, which is exactly what Emera Technologies, LLC (ETL) has quietly accomplished in less than a year. Since officially plugging in its BlockEnergy microgrid as part of the Kirtland Resiliency Project six months ago, the system hasn’t flinched, operating without interruption, passing every test Sandia has thrown at it.

It’s such a great case study (as you’ll see below) that surely it was part of the masterplan from the beginning.

“Well, we are very strategic, but we are not that strategic,” says Rob Bennett, CEO of ETL, which is the innovation arm of Emera Inc., a utility serving over 2.5 million utility customers in Canada, the U.S. and Caribbean. Aloft its utility perch, the experts at Emera could see all of the disruptive renewable energy technologies coming on the horizon, and they launched ETL to kick-start their own disruption.

“We had the luxury of being able to start with a development budget and a clean sheet of paper to reimagine it – to go all the way back to when Edison and Tesla were debating AC or DC power systems over a hundred years ago,” Bennett says, and no one would be a bigger critic of the result than him. Sure, he’s the CEO of ETL, but he’s been in the energy space for the last 30 years. He’s been an engineer, a systems operator and a CEO at utilities in Canada and the United States.

The culmination of ETL’s work – BlockEnergy – is a modular, hybrid DC/AC microgrid platform that is poised to lead the distributed clean energy revolution from the grid-edge. The system connects local generation and storage throughout communities of all sizes in self-sustaining BlockLoops using smart, distributed energy controls. 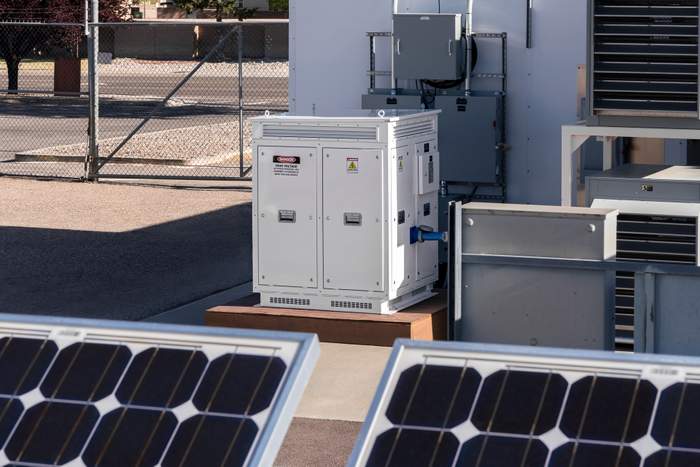 A BlockEnergy unit installed at KAFB.

What’s wilder still is nothing about the BlockEnergy system installed at KAFB was specially designed for the site. A nondescript new home development would use the same kit and modular building blocks as an ultra-secure military base.

“The BlockEnergy power system comes in a kit, and the skill level needed to assemble it is much lower than the skill level of the professionals that are required to work on high voltage power lines, for example,” Bennett says. “We have thought this through as a method of keeping costs down. The safer, the simpler, the more modular that you make it, the more cost-effective it is to build it and maintain it over its life.”

That is one of the reasons the military has been enthusiastic about it. Not only is it useful for an Air Force Base here in the United States, but it has utility in forward deployments.

Let’s head to the KAFB BlockEnergy proving ground and check it out. 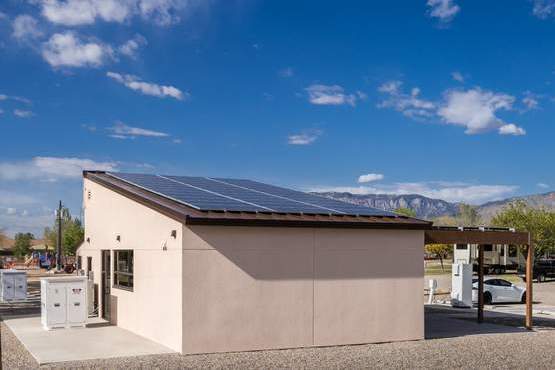 Zoom in on the Kirtland Air Force Base today and you’ll see each building (or “BlockHome”) has PV on the roof and a BlockBox on the outside. You might mistake the BlockBox for a central air unit if you’re not paying attention, but this contains battery storage and the proprietary technology that 1) runs the BlockHome, 2) shares the on-site distributed energy, 3) maintains balanced, peak power and 4) is able to interoperate with the local grid seamlessly whenever needed.

Start zooming back, and you’ll see all the BlockHomes are also connected to each other in a BlockLoop to share, balance and distribute energy among the group. That BlockLoop is then connected to a central storage unit and controller, BlockCentral, which is then connected to the grid. Two additional solar arrays were constructed to complete the generation side of the KAFB system. 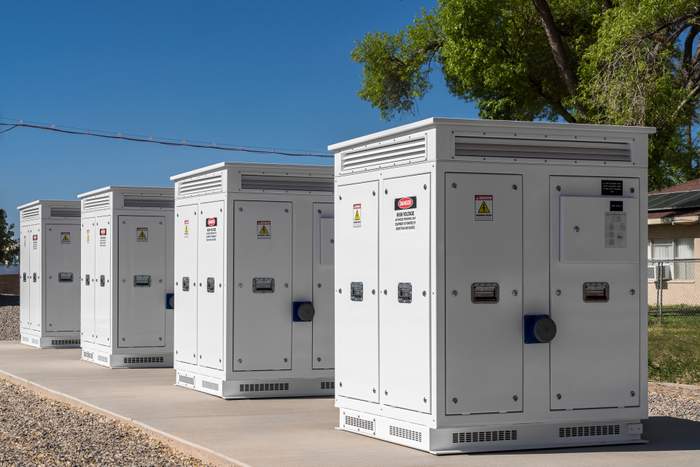 In total, the installation is a 250 kW hybrid DC/AC microgrid with 100 kW of installed solar and 220 kWh of total storage, all managed by 10 distributed controllers that utilize machine learning and game theory.

The platform operates independently and seamlessly with the local utility, providing additional grid service when asked. As communities grow, BlockEnergy is designed to expand without disruption, allowing new homes and businesses to snap into the BlockLoop system at any time for a truly frictionless experience.

Brains of the Operation 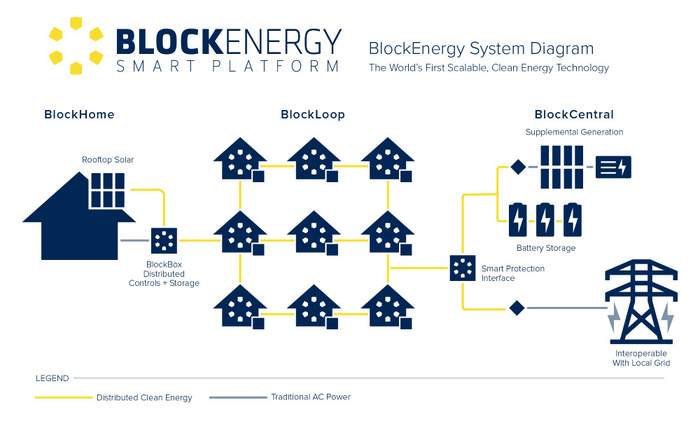 Sandia Labs has performed advanced loads testing to simulate lightning, fault conditions, a sudden loss of grid power or just random mundane events like what happens when thousands of people all turn on their washing machines at once. And I’ve already said it, but it bears repeating: The system remained stable.

This is all apparent inside the Gathering Space, a structure specially constructed for this project as a standalone space for the real-time system monitoring (and demonstrations) of BlockEnergy, built in partnership with ETL by architectural partners Dekker/Perich/Sabatini. Inside, the display wall is where the future of local, networked energy grids come alive. LED wall screens display a remarkable user interface, showing data and energy flows of the BlockEnergy modular microgrid system, showing the generation, storage and exchange of renewable power of The Gathering Space and all the local buildings interconnected to the local microgrid system – in real time, autonomously. 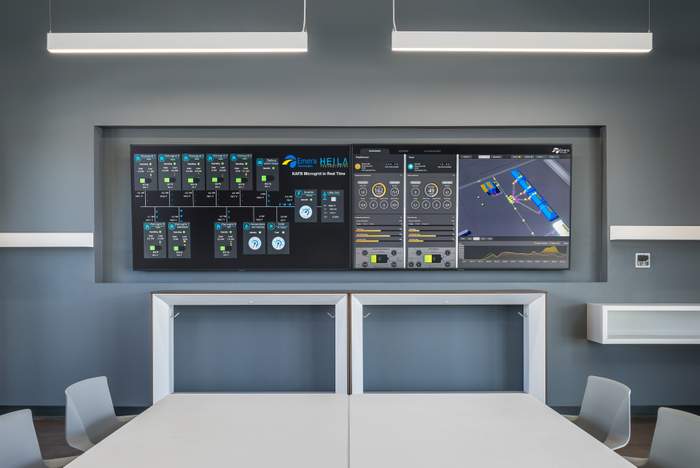 This is as close as we mere mortals will get to seeing the special sauce of BlockEnergy, its distributed controllers, in action. The controllers all use a combination of AI, machine-learning and game theory that make decisions for how energy is used and shared for maximum benefit throughout the entire, connected BlockLoop.

“The machine-learning part understands each load over time so that it can keep the state of charge of the battery at each block sufficient to optimally run,” Oppedahl continues. “If you have that, but then you are in a shared system, the next part is game theory, to make pricing judgements for the shared network.”

The auctioneer making those judgements is the controller at the BlockCentral, but crucially, if this central controller is compromised for some reason, the other controllers in the system take over that role – without any power disruption.

“This isn’t a microgrid with just centralized controls and one single point of failure,” Oppedahl says. “That does not give you the resiliency or allow you to practice game theory. People say we need a smart grid, but we already have smart generation and transmission. What we need is a smart distribution system, and a smart distribution system that can be managed by one entity.” 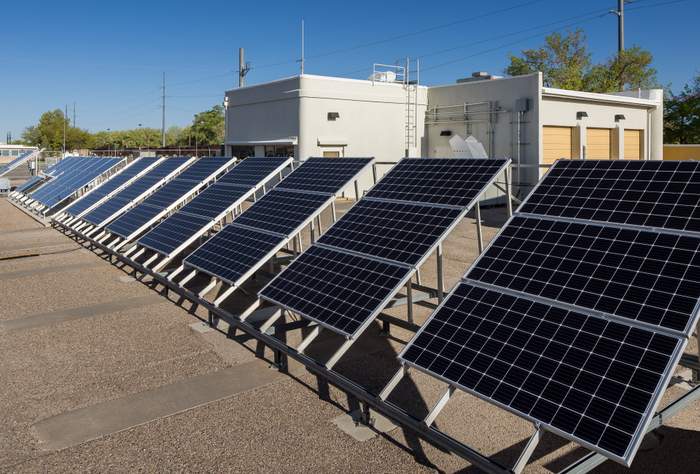 I assumed that the military might be averse to being a pilot project, but it turns out the military is fairly open to trying new, better, renewable energy technology.

“The security and defense of the country to a large degree, depends on the ability to have secure electricity,” Bennett says. “Almost every branch of the military is discussing energy formats that are more renewable because renewable energy is more secure. We just happened to be at the right time with the right, technology and with good partners, like Sandia National Labs.”

What is atypical about this military project though is how quickly it came together for BlockEnergy. From discussion and partnership to install and interconnection was only about six months. Credit for that goes to Col. Miller, the enthusiastic, future-focused base commander who could immediately see how the BlockEnergy system could help his dual mission of running one of the largest air force bases in the country, while developing technologies that benefit the military and the country as a whole.

The stacked value of these five attributes, appealed to the mission on base:

1. Secure Energy as a Service. Putting distribution and generation all inside their fence means they can protect it.

2. Renewable Energy as a Service. All federal installations are supposed to be getting 15 percent of their load from renewables today, which will soon bump to 25 percent. It is crucial for the military – the largest U.S. user of energy – to move toward sustainable options.

3. Resiliency as a Service. The military puts a way higher premium on resiliency than we civilians do (but should).

4. Control as a Service. In a limited energy situation, the base can determine which building is prioritized for energy – a community center or emergency communications building, for example.

5. Data as a Service. The BlockEnergy system provides second by second, watt by watt information, enabling great strides in efficiency and effectiveness. 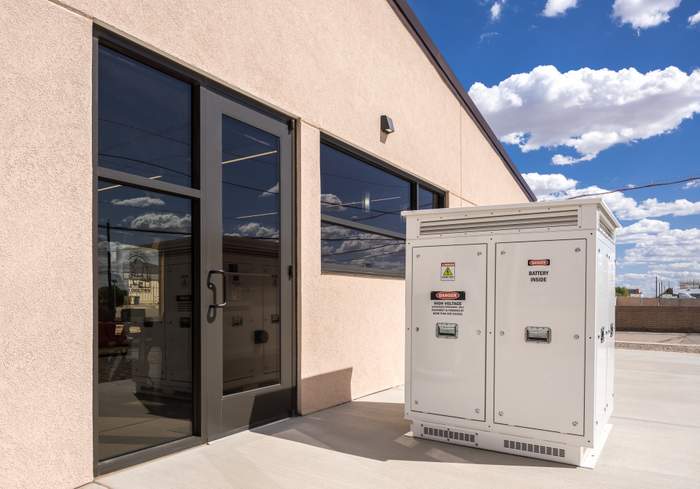 The testing ay Kirtland isn’t 100 percent completed yet (COVID-19 slowed it a bit just as it slowed down the rest of the entire world), but, likely, later this year, the next phases of the rollout will begin, with the key area of focus being new home developments. Serving new loads, Bennett believes, is the most economically efficient, cost-effective way to deploy clean energy and address a utility’s number one need.

“What we have produced is a different methodology,” he says. “Do not build a remote power plant, build a microgrid that generates most of its energy locally from renewable resources. Do not expand the Transmission and Distribution System and try to pull power from across the network to deliver it to a community. That is why the reliability suffers because you are moving that energy over such a long distance. Create it locally, store it locally in the distributed network of batteries. In our case, link those all together with a sophisticated, DC/AC microgrid, and a smart control system that uses artificial intelligence and machine learning to improve the efficiency as time goes on. You solve the same problem; you are providing energy to new load.

“Building the microgrids from a utility perspective, as a former utility CEO, I would want to give my customers better reliability. I would want to give them new technology,” he continues, on a roll. “Let’s face it, the utility world is using technology that is for the most part, a hundred years old. This is an exciting opportunity to have something new and different and much more engaging for customers, much more data-rich, much smarter and, importantly, much cleaner while keeping the lights on. Even when the weather is terrible, these communities will have power, and that is critical.

“The idea enabling customers to have renewable, resilient energy without any hassle, without any personal capital risks, and letting the utilities do what they can do best, deploy capital and build these systems and take care of them … we think that is a business model utilities and customers will really like.”

For even more insight into where BlockEnergy could go from here – and how solar installers could fit into the mix — be sure to grab the Summer issue of Solar Builder (coming in August) and stay tuned for more news from ETL in the coming months as they launch BlockEnergy during North American Smart Energy Week in October.